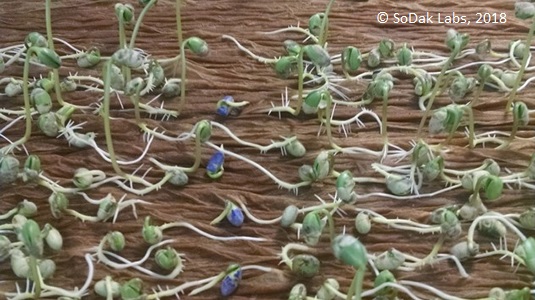 Herbicide Bioassay – Used for trait confirmation on 400 seeds. Seeds imbibe herbicide solution over a 7-day test. Each tray has positive and negative checks to ensure the accurate rate of herbicide has been applied.

Adventitious Presence (AP) or GMO % - Used to determine if GMO free seed is contaminated, an herbicide bioassay on 400 to 2400 seeds is utilized. Each tray has positive and negative checks to ensure the accurate rate of herbicide has been applied.

Seedling Spray Over – Used for later maturity (group 5+ soybeans). Seedlings are grown at 25C in a peat/sand mix for 7 days, then sprayed using a DeVries Track sprayer and evaluated 7-14 days later for non-trait and variant seedlings.

Glyphosate, Glufosinate, Sulfonylurea, Dicamba and other herbicides are utilized in testing.

For the herbicide bioassay the percentage of normal, abnormal, dead and trait seedlings are reported.

In the AP screen the percentage of trait seedlings is reported.

Seedling spray over includes the normal and trait percentage.

Confirmation of trait levels is required by trait or genetic licensing companies and documents the company's effort to assure the respective seed lot contains the desired herbicide trait tolerance.